Howdy Santa! Just guarding the Naughty/Nice list on your desk.

Santa, I don't know if you've heard, but something is very, very wrong...

We tabulated the latest score of the Naughty/Nice Blockchain.

Jack Frost is the nicest being in the world! Jack Frost!?!

As you know, we only really start checking the Naughty/Nice totals as we get closer to the holidays.

No one has EVER gotten a score that high! No one knows how it happened.

Most of us recall Jack having a NEGATIVE score only a few days ago...

Worse still, his huge positive score seems to have happened way back in March.

Our first thought was that he somehow changed the blockchain - but, as you know, that isn't possible.

We ran a validation of the blockchain and it all checks out.

Even the smallest change to any block should make it invalid.

Blockchains are huge, so we cut a one minute chunk from when Jack's big score registered back in March.

You can get a slice of the Naughty/Nice blockchain on your desk.

You can get some tools to help you here.

Tangle Coalbox, in the Speaker UNPreparedness room. has been talking with attendees about the issue.

Now, the REAL question is, how else can this be abused? Do you think someone could try and cheat the Naughty/Nice Blockchain with this?

If you have control over to bytes in a file, it's easy to create MD5 hash collisions.

Problem is: there's that nonce that he would have to know ahead of time.

A blockchain works by "chaining" blocks together - so there's no way that Jack could change it without it messing up the chain...

If Jack was able to change the block AND the document without changing the hash... that would require a very UNIque hash COLLision.

Apparently Jack was able to change just 4 bytes in the block to completely change everything about it. It's like some sort of evil game to him.

That's about all the help I can give you, kid, but Prof. Petabyte may have more. 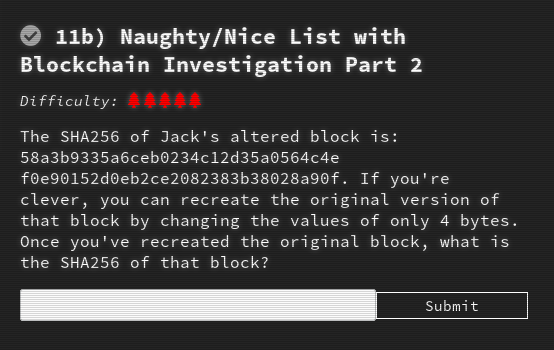 The following files should be retrieved to complete this objective:

The code is here 11b-get-block.py

The next step was to get all of the details for the block. The following lines were added to the code above:

The code is here 11b-block-details.py

The output was as follows (a lot of the binary data has been removed for clarity):

There was a lot of reading to do and the github repository at https://github.com/corkami/collisions was downloaded. The hashclash release v1.2b was downloaded and extracted.

The important points from the reading were:

11b-check-hash.py was written to check that the MD5 hash of the block remained the same as it was manipulated.

The first thing to fix was the byte that was set to 1 to say that Jack Frost was nice.

The changes were applied using hexedit to edit the file.

Based on the values that were dumped for the block:

To determine where the offset might be hashclash-hashclash-static-release-v1.2b/scripts/poc_no.sh was run and the output of the resulting files diffed.

It was determined that the offset is 0x40. So to apply this to the block byte (0x49 + 0x40) 0x89 needs to be changed. By experimentation it was found that the value of the byte needed to be changed from 0xd6 to 0xd7.

This is the original pdf which was extracted as 129459.pdf.

Following the details on slide 194, this file can be edited in hex to change the page number:

And now the really report from Shinny Upatree is visible.

To check the offset, the following comparison was done.

With all of the objectives complete, let's return to Santa's office to see if the door with the padlock is now open. 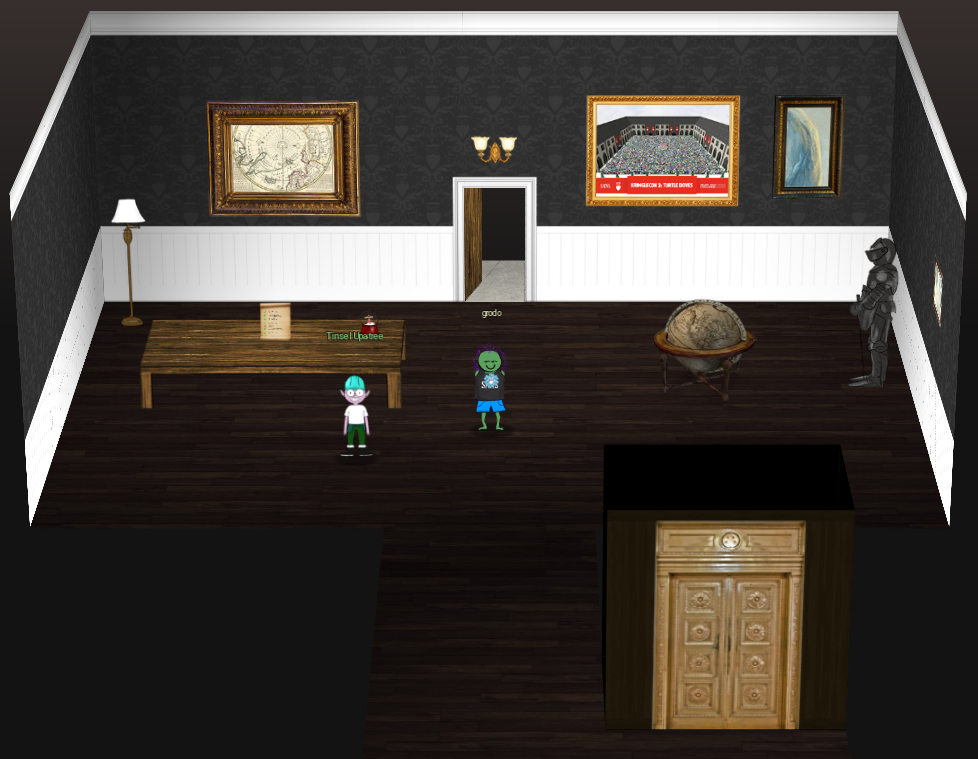 What a fantabulous job! Congratulations!

You MUST let us know how you did it!

Feel free to show off your skills with some swag - only for our victors!

He sent that magical portrait so he could become me and destroy the holidays!

Due to your incredible work, you have set everything right and saved the holiday season!

Congratulations on a job well done!

My plan was NEARLY perfect… but I never expected someone with your skills to come around and ruin my plan for ruining the holidays!

And now, they’re gonna put me in jail for my deeds.